On the 30th November, Girls Not Brides Uganda (GNBU) held a girl summit under theme: Working Together to End Child Marriage and teenage pregnancies. GNBU is a National alliance with a membership of 103 Non-Government Organizations working at community, district, regional and national level committed to Ending Child Marriage and enabling girls fulfill their potential and it’s chaired by Joy for Children Uganda and World Vision Uganda. 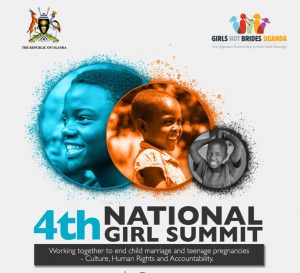 While opening the event, the Guest Honor Hon. Mutansigwa Diana, the Minister of State  in the Office of the Vice President said the summit is crucial for all because it provides a platform where proven practices will be shared, new innovative approaches formulated and formative ideas natured. She also applauded numeral social experts, human rights activists, cultural and religious leaders for joining the event and paying attention to the issue of “Child Marriage”, a subject that has eluded the nation for centuries and decades. Many stakeholders were in attendance including policy makers, cultural and traditional leaders, faith leaders, girls, civil society and parents in the communities. All these are key players in the fight to end child marriage and to ensure there are less child marriages, fewer teen pregnancies, and more years spent in school as this would eventually boost Uganda’s overall earnings.

The purpose of the summit was to provide a platform for girls to share their experiences by telling their own stories so as to amplify their collective voices in rallying for government action in supporting their rights and also increase awareness of the human rights situation of girls in Uganda, with particular emphasis on the impact of harmful traditional practices such as child marriages. 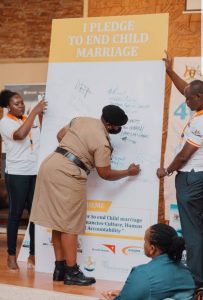 A stakeholder signing a Pledge Card to End Child Marriage.

Hon. Margret Makhoha, the chairperson Uganda Parliamentary forum for children moderated a session where the Children panelists addressed the applicability of sustainable development goals (SDG) 3,4,5 & 16 with SDG 3 talking about Good Health and Well-being, SDG 4 tackling quality education, SDG 5 emphasizing the need to achieve Gender Equality and empowerment for all women and girls and SDG 16, to Promote just, peaceful and inclusive societies.

Hon. Mutansigwa Diana, the Guest of honor was impressed by the panel and noted that girls are now breaking boundaries posed by stereotypes and exclusion. “Girls in general and women in particular are actively participating in all sectors of Uganda’s social, political and economical spheres as innovators and managers at all levels of our society,”  She adds. She attributed this change to the many opportunities that are being accorded to women and urged many stakeholders to come on board and support the Girl Child.

According Barbra Namara, the project coordinator, Girls Not Brides Uganda, girls ought to be empowered and mentored because child marriage not only harms and violates a girl’s body but also denies her the ability to enjoy many other rights, e.g., the right to education, right to healthy relationships, the freedom to choose whom and when to marry, when to get pregnant and how many children to have. “Such incidences have made may young girls to live in poverty,” She adds.

Statistics indicate that uganda has the 16th highest prevalence rate of child marriage in the world and the 10th highest absolute number of child brides, with an estimated 4 million in total. According to current statistics, 34% of women are married under the age of 18, and 7.3% are married before they turn 15. These are worrisome statistics. If nothing is done about it, many young girls will drop out of school which eventually leads to poverty. According to a report by UNICEF, Child marriage increases the risk of teenage pregnancy, which can have a profound effect on the health and lives of young women and contribute to high fertility rates. Current evidence shows that 25 per cent of the 1.2 million pregnancies recorded in Uganda annually are from teenage mothers, with more than 300,000 pregnancies ending in unsafe abortions. These occurrences violate the basic rights of girls and women as it is rooted in social and gender inequality and a desire to control women’s bodies and lives. 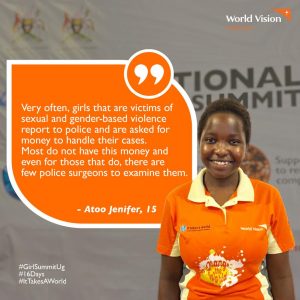 Uganda’s fertility rate stands at 5.9 children per woman, above the Sub-Saharan average of 4.8. This high fertility rate is attributed in part to the low use of contraceptives, but high rates of child marriage and early childbearing also play an important role. Ending child marriage would reduce fertility by 8 percent nationally, and could lower the country’s overall population growth rate of 3 percent by 0.17 percent. If child marriage were ended today, it is estimated that the benefit in terms of the higher standards of living that would be generated thanks to lower population growth would reach US$2.4 billion a year by 2030.There are other risks associated with early marriage: Girls who marry before 18 are at a higher risk of dying in childbirth. When a child is born of a mother younger than 18, research shows there is a higher risk of him or her suffering from either stunting (physical and mental underdevelopment through undernutrition) or mortality under the age of 5. The economic benefits that resulting from a reduction of these could reach US$275 million per year by 2030.  Under Ugandan law, child marriage is a crime. Global research, suggesting that girls who marry early are more likely to experience physical, psychological, and sexual abuse and violence from their partners than those who marry as adults, applies also to Uganda.

It’s proven that empowering women and girls helps economic growth and development”, It’s also important that we tackle the underlying gender inequalities that exist between men and women because no goal can be achieved without empowering girls especially when they are still young. Let’s all combine efforts and end Child Marriage. 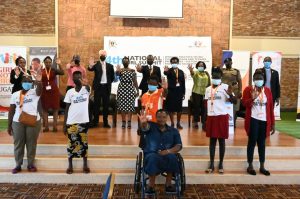 Participants and Different Stakeholders that Attended the Summit.

Cybersecurity threats in the home office.