Although the civil war in Syria and migration issues affecting Europe more intense than some years ago changed the mass media’s agenda noticeably, little is known about the coverage of migration from other – more Southern – African countries to Europe. This is not only true for European, but especially for African mass media. This research gap needs to be closed by a profound analysis in order to provide a deeper understanding of the role of the media in this context.

Thus, the project “Journalism in a Global Context” aims not only to connect journalism students in Africa and Europe and to point out the journalistic implications of migration for both continents, but also seeks to strengthen the scientific perspective on these intense political, economical and social challenges. Therefore the production of journalistic pieces is closely accompanied by a content analysis, which European and African researchers in the field of journalism studies conducted jointly under the direction of the Erich Brost Institute, TU Dortmund University.

On the basis of communication studies, it can be summarized that news about African events, are more often published if they are about conflict or harm: Journalists and newsdesks focus on topics like wars, crises, catastrophes, diseases of corruption and crime. It is called the conflict perspective.

Another structural feature of foreign reporting, the de-contextualization (the neglect of political, economic, social, and cultural cause-and-effect relationships) is also being criticized repeatedly in the western African reporting.

These context deficiencies are closely linked to focusing the elites and personalization of the foreign news.

Moreover, the reports are usually characterized by western ideas. It is reported in a simplified manner – also by reductionist images, which seem familiar to the western recipient, as they take on popular stereotypes. 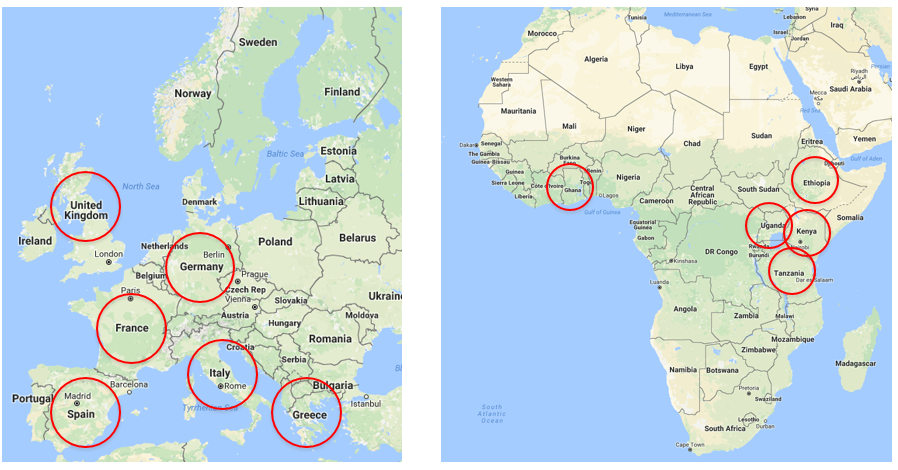 As up to now, to the best of our knowledge, no data has been gathered to answer this question trustworthily, the research team analysed the content of the online outlets of two opinion-leading newspapers in each participating country (Ghana, Uganda, Ethiopia, Tanzania, and Kenya in Africa as well as Germany, United Kingdom, France, Greece, Italy, and Spain in Europe). The sample contains all journalistic pieces related to the topic of migration from Africa to Europe, which were identified with a keyword search More than 1,500 articles, which have been published between June 1st, 2015 and May 31st 2016, have been analysed

The topic of migration is covered far more in European than in African newspapers, which shows a strong disproportion between both continents – only 1/8 of the total reporting is from African newspapers. France has an absolute special position in Europe: 35% of the reporting in Europe are from this former colonial power. In Africa, reporting is much more distributed – at a quantitatively much lower level: only Ethiopia dominates here.

Peaks could be explained thematically: Media from both continents focus on “General News” as a beat and on “Factual Genres” like reports as well as on political aspects of migration, while they marginalize economical, cultural or ethical topics. While European newspapers concentrate on political topics like migration policies, home affairs, and frontier security, African journalists report slightly more broadly about migration, its origins, reasons, and outcomes. Newspapers on both continents focus on the topics of accidental, disasters or rescue, e.g. shipwrecking. 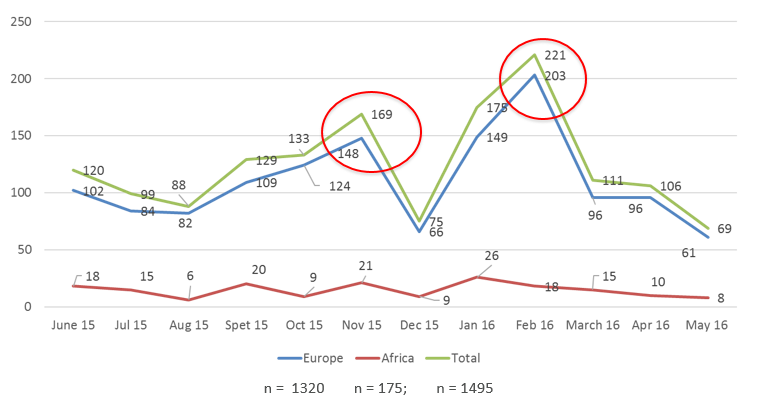 Furthermore, the Eurocentric coverage of European newspapers is striking: While they focus on European countries and European actors, there is a surprisingly high percentage of articles, which do not mentioned at least one African Country or African Actor in European newspapers.

More detailed results will be published in upcoming publications of the project “Journalism in a Global Context”. 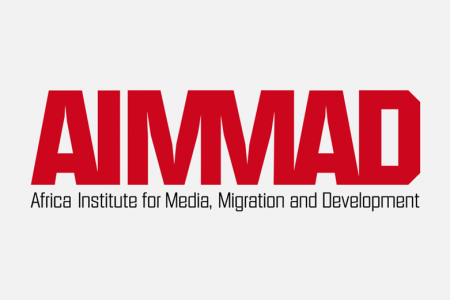 Journalism in a global context.